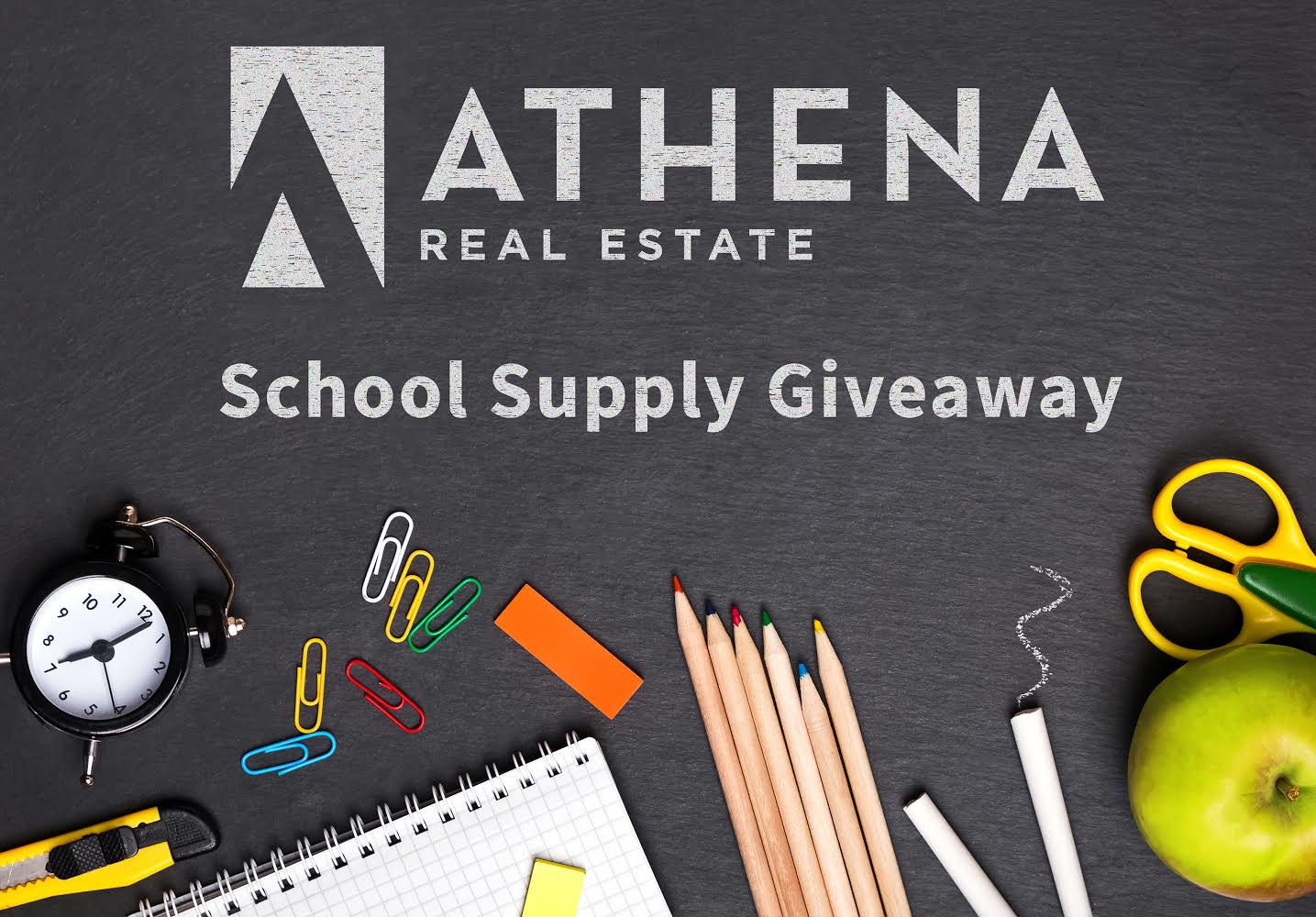 Athena is proud to announce its 2018 school supply giveaway promotion designed to support parents and teachers with the ever-increasing cost of school supplies.

By the way, for those wondering why teachers are included, teachers often pay for classroom expenses out of their own pocket, and Athena wants to help!

The rules, terms, and conditions to our giveaway can be found below.

If you have already liked our page, this step is complete, and you only need to tag someone and share our post to be entered.

You must be 18 years old to enter or have a parent or guardian’s permission.
You must be a legal resident of Louisiana (USA).
You must agree to the terms of these official rules.
Athena giveaway sweepstakes are not a solicitation for referrals or recommendations for its services. At Athena Real Estate, we believe in giving back to the community, and we create these giveaways solely for the benefit of others.

NO PURCHASE IS NECESSARY TO ENTER OR WIN

Participation constitutes entrant’s full and unconditional agreement to and acceptance of these Official Rules. Athena giveaway sweepstakes submission period commences on the day of the post and ends at 11:59 PM (PST) on the expiration day listed in the post. The winner will be announced the following week. The contest program is sponsored by Athena Real Estate, which is located at 6050 Ponchartrain Blvd. Suite 200, New Orleans, La 70124.

Eligibility: Athena Real Estate giveaway sweepstakes (the “Promotion”) is open only to legal residents of the state of Louisiana who are 18 years of age or older or who has written consent from a parent or legal guardian. Entrants must also be a U.S. citizen who resides in Louisiana at the time of entry. Employees, contractors, directors and officers of Athena Real Estate (“Sponsor/Administrator”) and its respective parents, subsidiaries and affiliated companies, distributors, licensees and the advertising, fulfillment, judging and promotion agencies involved in the development and administration of this Promotion (collectively, “Promotion Parties”), and their immediate family members (parent, child, sibling and spouse of each) and those living in the same households of each are not eligible. Void elsewhere and where prohibited by law.

Promotion Period: The Promotion commences on the day of the post and ends at 11:59 PM (PST) on the expiration day listed in the post. The winner will be announced the following week.

How to Enter: (all entrants acknowledge their information will not be used or sold for other marketing or promotional purposes.)
During the Promotion Period, go to the Athena Real Estate Facebook page at https://www.facebook.com/Athena-Real-Estate-1262526690438751/ then Tag someone that deserves the giveaway. Entrants must like the Athena Facebook page, comment on a giveaway post and tag someone.

Entrants under 18 years of age at time of entry must have parent or guardian’s approval to enter contest. If it is discovered that approval was not granted, that entry will be disqualified or forfeited.
LIMIT ONE (1) ONLINE ENTRY PER PERSON.
Prize & Odds: One (1) winner will be randomly selected and will receive the prize, which is listed in the post. Prize winnings will be sent to the winner within 1-6 weeks after the Promotion Period ends. No substitution or transfer of prize is permitted except at Sponsor’s sole and absolute discretion. All taxes, and all other costs associated with acceptance or use of the prizes, are the sole responsibility of the winner. Arrangement for delivery of the prize will be performed after winner validation. Odds of winning the prize depend on the total number of entries received.

All submissions must be entered during the official time frame of the Promotion to be eligible.
Comments must be Rated G and clean in topic. Sponsor reserves the right to remove and invalidate from this Promotion posts or comments that Sponsor determines in its sole discretion are inappropriate.
You must be 18 or older to participate or have written consent from a parent or legal guardian.
All federal, state and local laws apply. Winners will be notified through Facebook. Each potential winner may be required to sign and return an Affidavit of Eligibility and Release of Liability and a Publicity Release and an IRS W-9 form within ten (10) days of attempted delivery or prize will be forfeited. The return of any prize/prize notification as undeliverable or failure to respond to notices or return any documents in a timely manner, as determined by the Administrator, may result in disqualification and an alternate winner may be chosen. By participating, participants agree to release, discharge and hold harmless Promotion Parties from and against any and all liability or damages associated with this Promotion or acceptance, use or misuse of any prize received in this Promotion. Promotion Parties are not responsible for any typographical or other error in the printing of the offer or administration of the Promotion. Acceptance of prize constitutes permission for the Sponsor and their agencies to use winner’s names and likenesses for purposes of advertising and publicity without further compensation, unless prohibited by law. By participating in this Promotion, participants agree to be bound by the Official Rules and decisions of Athena Real Estate’s Management, which shall be final in all matters relating to the Promotion. Promotion Parties are not responsible for lost, late, misdirected, illegible, incomplete, non-delivered or postage-due mail; or for printing, distribution or production errors or for technical, hardware, software, or telephone malfunctions of any kind, lost or unavailable network connections, or failed, incorrect, incomplete, inaccurate, garbled or delayed electronic communications caused by the user or by any of the equipment or programming associated with or utilized in this Promotion, or by any human, or other error, which may occur in this Promotion. If, in the Administrator’s sole opinion, there is any suspected or actual evidence of tampering with any portion of the Promotion, or if technical difficulties compromise the integrity of the Promotion, the Athena Real Estate’s Management reserves the right to void suspect entries and/or modify and/or suspend and/or terminate the Promotion and/or conduct a random drawing to award the prizes in a manner deemed appropriate by the Administrator. In the event of a dispute regarding the identity of the person submitting an entry, entries will be declared made by the name appearing on the online entry. Sponsor reserves the right to disqualify any individual who tampers with the Promotion or acts in a disruptive manner. This Promotion is offered only in the United States and is governed by the laws of the state of Louisiana. By entering, entrants irrevocably consent to the sole and exclusive jurisdiction of the courts of the state of Louisiana located in Jefferson Parish for any action, suit or proceeding arising out of or relating to this Promotion.

Waiver: By participating in this Promotion, participant waives all rights to claim punitive, incidental and consequential damages, attorney’s fees or any damages other than actual out-of-pocket costs incurred to participate. Each winner waives all rights and indemnify Sponsor against any loss or liability resulting from the Prize.

Winner’s name and photograph may be posted on Athena Real Estate’s Facebook page.

Facebook is not a sponsor of the Athena Real Estate’s sweepstakes and any entrants agree to release Facebook from all liability related to the contest.

Athena Real Estate’s Management reserves the right to modify, change, or cancel this promotion at any time, without notice.

Disputes: Each entrant agrees that: (i) any and all disputes, claims and causes of action arising out of or connected with the Athena Real Estate Giveaway sweepstakes, or any prizes awarded shall be resolved through the sole and exclusive jurisdiction of the courts of the state of Louisiana located in Jefferson Parish shall be resolved individually, without resort to any form of class action, and exclusively by the United States District Court of Louisiana, or the appropriate Louisiana State Court located in Jefferson Parish, Louisiana; and (ii) any and all claims, judgments and awards shall be limited to actual out-of-pocket costs incurred, including costs associated with entering the Contest, or statutory damages, but in no event attorneys’ fees. All issues and questions concerning the construction, validity, interpretation and enforceability of the Official Rules, or the rights and obligations of the entrant and Sponsor in connection with the Sweepstakes, shall be governed by, and construed in accordance with, the laws of the state of Louisiana, without giving effect to any choice of law or conflict of law rules (whether of the state of Louisiana or any other jurisdiction), which would cause the application of the laws of any jurisdiction other than the state of Louisiana.